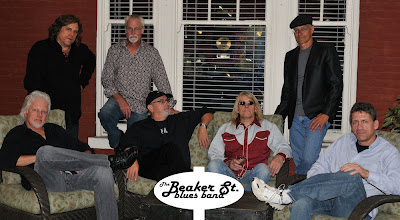 Last Saturday night I went to a wonderful event: a music festival benefitting Page High School’s prize-winning marching band. It was a feast of music all day. But by far the best event on the program was the finale: The Beaker Street Blues Band. Sitting under the spectator’s tent in the hot, humid night about nine 0’clock or so, I had just finished a dish of homemade peach ice cream and was looking forward to the last act. I was glad the weather had at last cooled a little bit. I watched while the band members climbed on stage and carefully prepared their instruments, the mics and the rest of their equipment. Then they started to play their R&B and what a group of talents! Steve Smartt, trumpet and vocals, tells what kind of music the band plays: “I like the classic two-horn sound of sax plus trumpet and the variety and versatility of using the horns either out front and in your face, or way down low in the background. I’m always learning something new with this band and that’s what makes it fun.” I’m a person who likes this kind of music “in your face,” and I wasn’t disappointed. By the time they had played several numbers, the audience was clapping, cheering, grinning, taking pictures, and dancing. The highlights of the evening were, for me, their version of BB King’s famous “Everyday I Sing the Blues;” the sax man playing two saxes at once as he played along with the trumpet; and the last number: the sax man jumped down from the stage playing furiously, strode over to a group of teen-agers dancing, pushed his way into the middle, still playing, and then made his way back to the stage, where the band finished for the night in a blaze of glory. To read a lot more about this band, go to http://www.beakerstreetbluesband.com/. And if you live around Nashville, find out where they’re playing and GO!