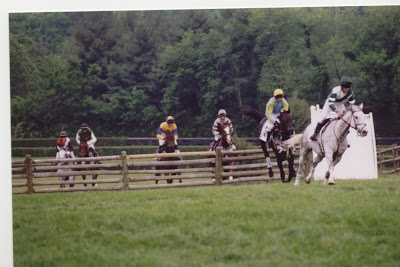 My forthcoming new novel, He Trots the Air, is about the drugging of horses, yet another way horses are misused by unscrupulous trainers. Connie Holt is back, whom readers will remember as the equine insurance investigator in The Case of the Three Dead Horses. The new story revolves around a conspiracy to drug a prodigious colt named Darkling Lord; he is slated to run in the International Gold Cup steeplechase in Virginia. But Connie’s investigation is hampered by lack of information. Who is behind the plot? How many people are involved? Where and when will the drugging happen? What will be the drug used? And most important, can Darkling Lord be saved? Therein lies the mystery.
But while it was great fun to tell this story, my great black colt is just an invention, and I don’t have to worry about a real plot. Sadly, many real-life horse owners do. Here is one case in point. Last July, a Pennsylvania trainer named Darrel Delahoussaye was arrested and charged by Pennsylvania State Police with administering illegal drugs to racehorses. The specific drug was milkshakes, that is, the trainer was using a substance that is illegal because it is used to gain unfair advantage. The substances used to make milkshakes as well as syringes were discovered in a truck associated with Delahoussaye, and a former employee testified that he often saw the trainer administer milkshakes to horses on race day.
The most important ingredient in a milkshake is sodium bicarbonate, known to the rest of us as baking soda. Here is the theory of how baking soda works in a horse’s body. (By the way, the process is by no means thoroughly understood and research is ongoing.) When a horse is running as fast as he can, lactic acid builds up in his muscles, and he becomes tired. Some believe that large doses of bicarbonate offset the accumulation of acid. Thus the horse will be able to run longer and faster, and with less fatigue. The milkshake is often administered through a nasogastric tube. (Imagine the harm that might be done if an unskilled person ran the tube into the horse’s nose and the fluid went into the lungs rather than the stomach.) While horses don’t seem to be adversely affected by milkshaking, it is still necessary to continue drug testing programs to determine if there is bicarbonate in a racehorse’s body, and if so, enforce the law vigorously. As the Delahoussaye story above demonstrates, people will still try anything they can to change the horse’s performance–no matter that it’s illegal.