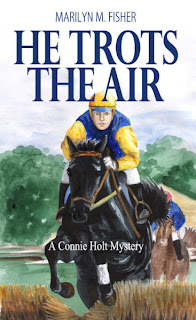 At the beginning of He Trots the Air, Connie has a string of good fortune, leading her to believe that this year will be happy, vastly different from a year ago when she had to investigate the tragic deaths of three horses. For one thing, employer and friend Cary McCutcheon has acquired Darkling Lord, a Thoroughbred of dazzling pedigree, and plans to run him in the Gold Cup International Steeplechase in October. The colt will train at Fayence in Albemarle County, and Connie looks forward to visiting the horse often to watch his progress. Earlene Collins, who breeds Arabian horses, finds what could be an original Henry Stull (1851-1913) painting hidden in the attic of her pre-Civil War home. Busy with her work, Earlene asks Connie to find an art expert to work with the painting, a task Connie welcomes. And in Denver, where she meets with restorer Patrick Laurent, she reunites with a man whom she has never forgotten.
But on her return from Colorado, things turn dark and dangerous. No one but the reader knows that from the beginning of the novel, a plot has been underway to drug Cary’s colt for reasons that have nothing to do with financial gain. Someone has hired three desperate people to commit the crime. Just thirteen days before the Gold Cup, Connie and Cary learn that something is going to happen to the horse. They start a relentless, time-starved investigation complicated by too few facts to go on, the continuing frustration of speculation without foundation, and the strong possibility that they won’t be able to solve the puzzle and save Darkling Lord from harm. As both the conspirators and Connie and Cary move closer and closer to race day, tension and worry grow almost unbearable. The climax comes in front of the colt’s stall on the day of the race–and no one is ready for what happens.
If you would like to read He Trots the Air, just click on Contact Me Directly (under the book cover to the left) to order an early autographed copy. I’ll tell you how you can get it now, and at a substantially lower price than after June 15.