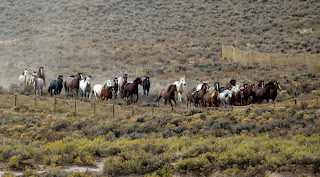 In Audubon magazine of January to February 2011, Ted Williams, a longtime conservationist, takes on the explosive issue of the wild horses, In his article “Saddle Sores,” he describes his trip to see the BLM’s October 2010 roundup of the horses, known as a “gather.” There is definitely a war on words in the struggle to take care of these horses; the word “mustang” as applied to them evokes the proud conquistadors riding gorgeous, equally proud horses, to which the modern wild horses are supposedly related. In reality, says Williams, “these  are mongrels, descended from livestock owned by everyone who ever dumped or lost horses in the West from 1540 to 2010.” This romanticization of the horses’ background is irrelevant. There are too many of them. Many are sick and dying.  They neeed help right now. The word “gather,” used by the BLM in obeisance to those who fight against its practices, is a euphemism for “roundup.” It is widely said that the wild horses are frightened by the helicopters used in the roundup and may injure themselves; Williams said that when he watched the process, the horses were “nonchalant” about the whole thing. They didn’t stampede, they mostly trotted, they ate and drank contentedly in their holding pen. The helicopter stayed about a mile behind the horses as it herded them. The cliche “Wild and Free” is hardly true either, since they are quite grimly, free to get sick or die in a habitat that cannot sustain them.
As you can see from the picture above, their habitat is fragile. Williams describes it vividly: “I hiked across badlands of shale and polished stones, over sparse shrubs, thin, widely spaced clumps of grasses and forbs, and dry dirt that crumbled and sailed aloft. Ancient, scraggly junipers dotted the hills. Pronghorns and mule deer browsed the valleys. Less than seven inches of precipitation a year isn’t unusual here, and that precipitation may come in two rainstorms, so it doesn’t do much good.” He explains that since horses have solid hooves and teeth that mesh, they are very destructive of all native vegetation. The horses wander over the range eating anything they can find–“horses stomp the shrubs into the dirt to get the last blade”–but drive away other animals, people, and grouse from the area.  More nutritious grasses are dying out, due at least partially to this overgrazing. When there is drought, this ecosystem becomes even more unsustainable. And with too many animals on this impoverished land, the problem looks unsoluble.
Can anything be done? Secretary Salazar suggested that the horses be transported to other, more fruitful lands but Williams says that he had to drop this idea because of the outraged reaction to his remedy. Even if they were transported to other habitats, the costs of maintaining these herds increases all the time.There was hope for a while that people would adopt the wild horses; that has proven a vain hope. People today are getting rid of their horses due to our depressing economic problems. How about euthanizing the excess horses? Few people want to even consider this as a solution. Surgical sterilization is a possibility as is injecting mares with an anti-fertility drug; Williams points out that the latter drug, PZP, isn’t alway dependable and may wear off after several years.
It seems there is a stalemate here. But I believe that if people who want to save the wild horses, people who are fair-minded and willing to listen to many schemes and even try some, could sit down and talk about it without the hyperbole, bitterness, bias, and lack of common sense so often present when coflicts are approached, something could be done.
Williams suggested that all people who are interested contact Secretary Salazar and urge him to use every tool at his disposal to control wild horses. Keep track of what is happening in Congress about this issue. Contact your representatives about it. And above all, learn the truth about the wild horses and their terrible dilemma.