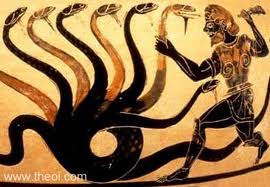 One of the most terrifying stories about Heracles was his battle against the Hydra, a thing of horror with the body of a serpent and many heads. (The number of the heads varies, according to which myth you read.) As soon as a head was cut off, the beast grew another two. Heracles and his friend thought that if they cauterized each stump, no new heads could erupt. But one head proved to be immortal, so the strong man cut it off and buried it.Today I feel like Heracles, except that the heads on my Hydra, the tasks of marketing my book, never die. Most folks, I expect, don’t know much about this part of the author’s life.  Many have been surprised when I tell them that I have to perform jobs that seem to them unnecessary. “But the publisher does all that,” they exclaim. Like Heracles, I fought an epic battle recently. The Hydra head task was reading about 500 blogs and then finding among those,  a few bloggers who might want to read my book and review it. Like Heracles, I learned a lot from the quest. Tomorrow I’ll tell you more.