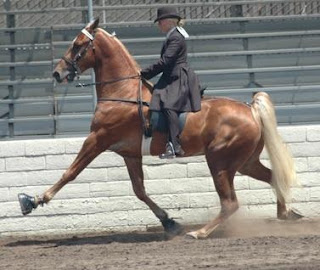 The Tennessee Walking Horse is an American breed of 15-16 hands. Said to have been developed by plantation owners to provide a comfortable ride for those who had to spend hours in the saddle every day, the horse has a reputation for docility. I know this is true for I have ridden one on a trail ride, and could not believe the smoothness of the horse’s performance. “Gaited” horses have an inherited ability to perform five gaits: walk, trot, canter, stepping pace, and the rack. The Tennessee horse is known for its gait which is a half run and half trot movement. Other gaited horses are the American Saddlebred, Missouri Fox Trotter, Rocky Mountain Horse, Standardbred, Icelandic Horse, Paso Fino and Peruvian Paso. Before the 1950’s, owners and trainers bred the gentle Walking Horse by regular means and liked to show off their beautiful animals, competing for and winning prizes. But then something awful happened. An unscrupulous group of owners and trainers who believed the training was too slow, decided to try a technique they’d heard about: soring. They’d seen Midnight Sun, a great Walking Horse who could lift his legs very high, the so-called “big lick,” and they wanted their horses to do this too. Soring would have three “advantages:” more high-stepping horses which thrilled show-goers; more prizes in shows, and more prestige for the owners and trainers who used this training method of torturing their horses. Sure enough, the tortured horses had an edge over their conventionally-trained buddies. The 1960’s saw widespread use of soring. When there was a huge protest from those who esteemed horses, the Horse Protection Act was passed in 1970 and amended in 1976. But some owners and trainers were still defiant, continuing to sore. And to this day, horses are still suffering. In future posts, I’ll talk about what the law entails and why soring has not been eliminated.