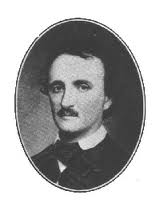 In all my years of teaching American Literature, I can’t remember any student who disliked Edgar Allan Poe. Maybe it was the ingenious tales of horror he told; or it could have been the scandal-ridden tales people told about him–stories still told in college classrooms. I’m going to try to unravel that fellow above on April 26th at 6:30 PM. If you live anywhere near the Brentwood Library in Brentwood, Tennessee, come and join us. This lecture will be a reconsideration of Edgar Allan Poe.
It is highly appropriate to talk about Poe today. He is not only The Father of the Detective Novel, but one of the most influential writers in American literary history. I hope to show Poe, then, in this expanded context, as much more than the artist who dealt in the creepy-crawlies and still frightens junior high students to death with his ghastly images.The discussion will include Poe’s life, the literary genres in which he worked, the literary influences on his writing, some of the elements of his technique, which are still relevant to writers today, and finally, his influence  on American writers who came after him. To register, call 615-371-0090, ext. 851. I’m looking forward to talking about one of my favorite writers of the nineteenth century. Like all voracious readers I know, I too am fascinated by Poe. Hope to see you there!