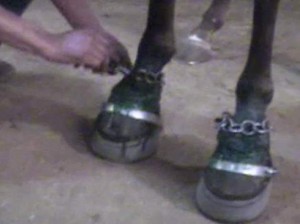 Horse abuse like the  drugging of racehorses  and soring  of gaited horses is often accompanied by a conspiracy of silence. It is not only the abusers who keep quiet. Often, it people who do not harm horses but who won’t speak up. Why? They are ashamed of something their fellow horsemen and horsewomen are doing; they are afraid of being intimidated by the abusers; they want to forget such horrors happen so don’t speak of them; they are afraid they won’t be of any help in the struggle to get rid of these “training practices.” And don’t forget the money motive.

Tony Gonzalez reported in The Tennessean on June 15, 2012, about two veterinary groups: The American Veterinary Medical Association and the American Association of Equine Practitioners.   They are appealing to the USDA, the group that is charged with inspection of horses at shows, to come out and just prohibit soring devices in show rings.

The veterinarians are calling for a ban on all action devices used in soring, such as burning chemicals, chains, bracelets, and collars, all of which cause pain in the horse’s foot. Remember here that  pain is inflicted on purpose. Some who defend soring say that it doesn’t hurt the horse. But the purpose of soring is to make the horse’s feet so painful that he lifts them high to escape the pain, but he can’t, of course. The horse keeps hoping the pain will go away so he lifts his feet very high, making that grotesque movement the sorers like so much, what they call “The Big Lick.”

The practitioners also include in the proposed ban perfomance packages, pads or stacks, that once attached to a horse’s foot, adds weight and increases the amount of force felt at each step by the animal. These pads can hide hidden devices to hurt the hooves.

What does the USDA say to this ban? Spokesman David Sacks points out that action devices and pads are legal but the group is “looking at proposing changes in the near future….But that would, of course, require a full regulatory procedure, so it’s not going to be an overnight process, and we’ve not yet determined all the specifics involved.” There is more, but is equally as frustrating to read.( What the USDA did do earlier in June was to make the minimum penalties for HPA violations stiffer.)

And last, what does the Tennessee Walking Horse Breeders’ and Exhibitors’ Association say? It says that there is no scientific evidence that action devices and pads harm a horse. Bad people sore horses, not devices. The association does not condone soring or any other harmful practices.

However, there is scientific evidence that horses are harmed by these devices.