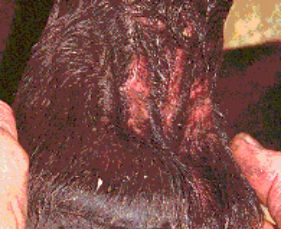 There have been several victories this year in the fight against soring. Remember The Tennessean’s relentless coverage of the problem; the Humane Society’s videotape that made the airwaves and its famous billboard close to the Celebration grounds promising rewards for tips about soring; and the USDA and its stepped up efforts to catch horses that have been sored and its changed rules to better police the HPA; and finally the always excellent work of Friends of Sound Horses.  Some people who sored horses were exposed and had to go to court.

Is there a chance soring will be gone in the next few years? Maybe if the lucrative money to be made in the industry were not a factor. The Tennessean points out that if you raise a Walking Horse stallion who has the bloodline and shows promise, you can ask one million dollars for him. Now let’s suppose you’re a buyer. What do you stand to gain if you buy that horse? You can train him, put him into the ring for money and prestige. After he retires, you can hire him out for rich stud fees.  Stud fees, says The Tennessean, average about $2500 a mating. But if you have a Walking Horse of royalty, you can charge $4000 a mating. And given that the royal colt can be used many times a year, maybe even 250 times, the stud money can certainly justify that first  one million investment we were talking about.

The question is, how will you train that horse?  Depends on whether you are an ethical owner, trainer, or breeder. By the term “ethical,” I mean that you consider it immoral to cripple a horse into stepping in an unnatural way so that you can make money and achieve a reputation as a winner. You must remember here that many people do not sore their horses. Trainer Chad Williams, who lives north of Shelbyville, says that horses don’t have to be tortured to step in that unusual way, and emphasizes that his stable doesn’t abuse its Walking Horses. He invites anyone to step into his barn and observe the way he trains them. Williams maintains that many owners and trainers are in the Walking Horse shows because they love their animals and wish to compete with them.

But it’s that depraved group that believes a horse has to be sored that is the problem.

Some people want to do away with the Celebration and its tainted history. Do you know about the Walking Horse group in Franklin, Kentucky, which rivals Shelbyville’s organization? It’s called the National Walking Horse Association. It was formed in 1998 to counter the Shelbyville horse practices and the Celebration. Let’s see how it differs.

There is a choice then. If you value your Walking Horses and want to compete with them,  join the Franklin group. You will not make as much money as can be made at the Celebration, but if you have your options straight, you won’t care. Soring won’t be an issue.

The best way to solve the problem of soring in Walking Horse country and still have the Celebration is to change that organization radically. Change the culture. Obey the animal abuse laws of our state and our country.  Pack the Celebration with rigorous inspections and other rules which must be enforced. Make the Celebration motto, “Zero Tolerance.” Let those who sore know that they will be prosecuted to the extent of the law; they will be barred from the Celebration for life. No exceptions will be made for friends, relatives, neighbors, colleagues, fellow trainers, even veterinarians who collude to sore.  Anyone who sores should be considered RENEGADES by the Celebration managers. That last is more important than it seems. If it had not been for the good old boys who winked at their friends soring horses long ago, and still do, we wouldn’t have this problem now. Tennessee and the city of Shelbyville wouldn’t have terrible reputations among horse people for refusing to do anything about soring.

I’d like to thank the following for what progress we have had this year in getting rid of soring: The Tennessean; Wayne Pacelle, Humane Society president and CEO and his colleagues; the USDA and its determined inspectors; and Friends of Sound Horses  that works very hard to maintain good, valid information on the violations of the federal law and who the violators are, and then publishes these facts–enormously helpful to anyone working on this problem. I’d also like to thank the many unsung bloggers who continuously work at getting rid of soring.

To read more, go to the following: