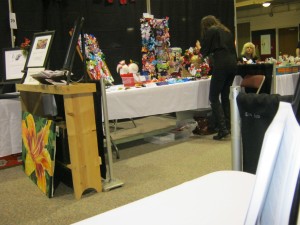 I’ve been having a lot of fun this season, selling my books at craft fairs. Above you see an example of the pretty tables people set up. I took my picture from across the way. I’ve been thinking about how much I learn when I go to sales. Last Saturday, a lady came up to my table and said, “I know you. I bought your book at the ______ Fair!” That was The Case of the Three Dead Horses, which I slowly wrote in two states, and finally finished and submitted for publication. The lady was thrilled to find out that I had written a second book,He Trots the Air, and  snapped it up. That she remembered my work and me was more exciting to me than the sale. At another sale this season, a farrier was strolling by and stopped to stare at my cover, in which the illustrator had  surpassed himself. My glorious black steeplechase horse. When I asked, “Do you like horses,” he stopped and gave me the most interesting facts about his job and soring horses, which as you know, I write about often, here and elsewhere. And last Saturday, a gracious lady who works in a prison stopped by and I learned so much about her job that I took some notes after she left after buying a book.

I’ve realized that I’m writing my third novel when once upon a time I didn’t think I would be able to complete the first one. I am now at 6, 751 words of the third, aiming for 75,000. One reason is that I am always fascinated by what my protagonist Connie Holt will do next. I invented this character as an equine investigator, and there is alway potential for her to have more adventures solving mysteries about horses. And the setting provides incentive to keep writing too: Central Virginia, where I lived for quite a long time, and which is one of the most beautiful states I’ve ever lived in. Every time I write a new book, I get the chance to revisit a character I really like and a state which I miss a lot.

Who knew when I was cranking out my first attempts at a novel that I would come to this? Pretty good fun, being a writer!