Home→Blog→Uncategorized→Scary Visitor on My Deck 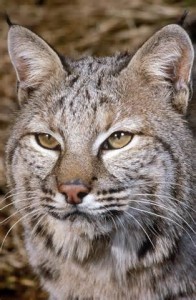 On Friday morning July 18, 2014, I looked out the back window of my kitchen and saw a youthful version of this fellow above lying on my deck. I had had an impression of a leaping body prior to my eyes focusing in on this bobcat, and at first I had thought there was a new cat in town. But looking closely, I realized that this was not like my cat, but indeed had a rather evil cat face and was built differently from my fat  comfortable fellow of nineteen pounds. This cat was heavier and larger, more of a blocky shape than my round shaped house pet. When I cautiously raised the blind a little bit to see him better, he leaped into the dirt around the bushes that surround the deck but seeing no more movement, he leaped back on the deck again. Eventually he disappeared once more and never returned. My neighbors and I speculated about him, laying his appearance to the massive construction work in back of us and the subsequent changing of his usual stalking routes, and also the fact that our land is heavily populated by bunnies. Later I went to the internet and learned that indeed bobcats had been seen where I live. I warned my neighbor next door of the bobcat.She has a tiny little dog who runs all over, but she was undismayed.