Home→Blog→About This Author→Agricola and Cloudcroft: Garden of Eden in Virginia 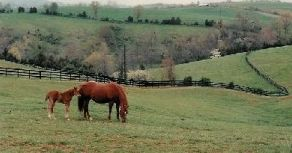 I’ve been engaging in a pleasurable exercise for the last few days: trying to pick a vacation spot or maybe even several for my 2015 getaways. The place I really wish still existed is shown in this picture. Cloudcroft farm. A farm in the clouds. When I first moved to Virginia from cold and sterile Buffalo,  I wanted to buy a horse to ride. A man told me about a breeding farm called Cloudcroft in a place called Agricola. Agricola was a famous Roman general:  Gnaeus Julius, a.d. 40–93. Already I was getting interested in the place. By the way, exploring the beauty of Virginia is what I miss most about living there. When I started to write fiction during those years, there could be no other setting. Anyway, on the way up to Cloudcroft, the road kept steadily rising and becoming more and more rural. I called the helpful man and said, “I can’t find Agricola.” He chuckled and said “That’s because it isn’t there any more.” (Later I found a road marker with Agricola on it.) Flummoxed, I paused and he said, “Keep going straight. Look for Cloudcroft on the left.” I found the farm and drove up the steep, high road toward the mountains to reach the pristine white and blue buildings of Cloudcroft farm. The side road kept reminding me of a Virginia version of Eden. The vegetation was thick and of a heavenly green I’d never seen before.  Everything could only be described as “lush.” And to add to everything, Cloudcroft was high up in the mountains. I realized that day that the  horses that lived there liked to go farther up into the thickly-wooded mountains and then reappear later down by the buildings. Eventually I settled on a rather humble but sweet quarter horse residing there and bred her. She produced a beautiful little foal. There they are above grazing happily. Driving out to Cloudcroft every weekend to ride and later to check the progress of my mare was my best-loved activity. It really did refresh my soul those days. Eventually, my idyll ended in sadness. The farm went bankrupt and had to be sold. It failed again. There was still a Cloudcroft, but it was an expensive housing development across the road. There was no comparable beautiful clean stable to put my horses in and I had to sell them.