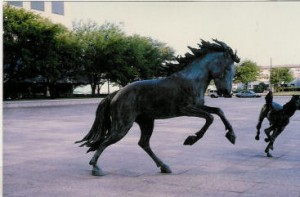 Once long ago, I visited my son in Texas. That trip is memorable for many reasons, but I will never forget our visit to the Mustangs of Las Colinas. When I first saw the nine bronze mustangs running across the pink granite plaza of Williams Square, I realized immediately that their bodies were absolutely realistic and I knew a master sculptor had created them. I was also enchanted with the stream that some of the horses were running through, their legs and the resulting upheaval of the water cunningly combined. What enhances the beauty of the horses is their location in a business development around the plaza. The plaza furnishes an oasis in the middle of the surrounding buildings. And indeed relaxed people are encouraged to sit on the plaza: workers, tourists, anyone else who cares to contemplate these nine horses and their beautiful, powerful, muscular bodies in motion. How did they get there? I learned that they were the brainchild of Ben H. Carpenter who transformed his former family ranch into a business development called Las Colinas. He decided to put a group of wild mustangs on the plaza to celebrate the equally wild and untamed history of his native state. In 1976, he consulted Robert Glen, one of the premier animal sculptors in the world, to bring Carpenter’s vision into life. The sculptor spent a year studying the history of the mustang. He found out that the American mustang was cross bred. Glen discovered a horse in southern Spain that still had the original pure bloodline of the conquistador mustang. That horse became the model for the Las Colinas horses. The story of how Glen made the horses is fascinating, since his studio was in Nairobi, Kenya, and the fiberglass molds of his models had to be sent to an English foundry. There is much more to this history. You might want to do more research. Meanwhile, if you are anywhere near Irving, go and see these horses. I took the picture above and had it enlarged to hang in my home in Virginia. If you’d like to read more about Robert Glen who specializes  in African wildlife, go to www.Robertglenbronzes.com. Let’s not forget Ben Carpenter whose wonderful vision this was.