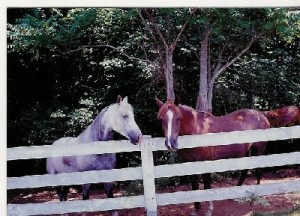 When I was living in Virginia, there came a time when I was without a horse. At the place I rode at, I noticed a gorgeous Arabian someone boarded there. Asking around, I discovered that he had a brother, and went out to the farm where the brother lived. I met his owner and breeder, and he told me he still had the brother. When I saw the gray and white Arabian, I fell in love. The owner told me had to be honest; the colt had previously been owned by a teacher, but he had tossed her off his back. He wasn’t dependable. Nevertheless, I wanted that horse, and not only rode him myself but asked my riding teacher, with much more experience than I, to ride him too. We did so and he behaved like an angel’s horse. I paid for him and took him to my teacher’s place to live. He would need training which I would be glad to furnish. At first he seemed uncomfortable there, but soon Prince found the brown horse above and they became buddies. The only thing wrong was that Prince seemed to shy away from a section of the fence. The teacher said that there was nothing there to be frightened of and all I had to do was to be careful when I rode him past the fence. But then there was a heavy rain where I lived and I couldn’t ride for two weeks. Finally I was able to go to my teacher’s farm. The first thing she told me to do was longe him. You longe a horse by working him in a circle around you. He’s fastened to a line about twenty to thirty feet long. I stood in the middle and encouraged Prince to walk and then trot around me in a circle. I envisioned him eventually cantering smoothly in a circle. He did fine this night, and I got on his back and proceeded to trot him around the riding ring. As I approached the fatal section of the fence carefully, he stopped and abruptly flipped me off his back. As I fell to the ground, I thought, “Don’t land on your back.” I didn’t, but landed hard on my left shoulder. As I picked myself up off the ground and stood up,  I found my arm behaving strangely. The lower half was flopping uselessly. The teacher ran over, her face ashen. She drove me to the nearby drive-in hospital annex where a doctor I knew socially received me. (Much later he told me he knew exactly what had happened to me but didn’t want to upset me by telling me the shoulder was broken. He had the same injury himself long ago.) Tonight he was cheerful but at the same time serious, if you can imagine the combination. He told me I had to go to the hospital as soon as possible and dispatched an ambulance. His nurse told the driver, “Don’t shake her around. Go very slowly. She has a dislocated shoulder.” When I got to the hospital and had x-rays, the orthopedist said grimly, “You have a dislocated and broken shoulder. Surgery tomorrow. I don’t have anyone to assist me tonight. I’ll give you something to make you sleep and I’ll operate tomorrow.” He told me to stay as still as possible in bed. It took six months, a stiff course of physical therapy, and two surgeries to get over the injury which the orthopedist had called “a mess” upon seeing the x-rays. What happened to my beautiful Arabian? I had to sell him back to his owner, who was overjoyed to get him back because he had bred him and missed him. I couldn’t go on owning him because I had a demanding, stressful job and couldn’t do much with my wreck of a shoulder. I regretted losing Prince a lot and wished I could have completed his training. Of course I didn’t blame Prince, and I was glad for the short time I had him. I still remember him with fondness.