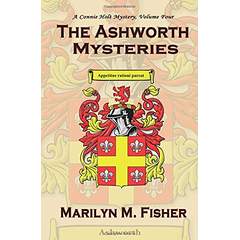 “The Ashworth Mysteries,” book four in the Connie Holt Mystery Series, is here. Fans of Connie and her adventures in Virginia horse country will meet their friends from the first three novels plus other intriguing characters, including Steve Irby, a new farrier and failed country music singer from Nashville, and new doctor, Dick Fairfax. Ashworth historical characters and events are here too.

Like to know more? Here’s a brief introduction to the novel.

“The Ashworth Mysteries” is the story of an annus horribilis in the fortunes of Cary McCutcheon and his wife Pam of Bedford, Virginia. In this newest story, Cary and his wife have an unusual problem with Pam’s aunt, Pamela Ashworth, a still beautiful and mysterious woman who lives in Charlottesville. Pamela needs help from Pam and Cary. She is suffering from a heart ailment and her finances have long been in need of a review. Good business dictates that the very old Virginia family of the Ashworths be investigated before its financial situation is analyzed. But there are mysteries about the family that have never been brought to light.

Until recently, Cary and Pam had intended to work with Pam’s aunt themselves in an intensive investigation that might take six months or more. But they didn’t figure on Pam having a bad riding accident. At the beginning of the story, Pam is thrown from her horse in a jumping accident. Unconscious, Pam is transported by Pegasus, the University of Virginia helicopter, to the hospital. Depressed by the accident, Cary fails to realize he has serious business problems. Connie Holt and the rest of Cary’s staff are disillusioned and worried. A most important conversation between Steve Irby and Cary becomes the catalyst for Cary’s realization that everyone in his horse community is in trouble–including him. His particular crisis includes financial problems, the real possibility of losing his beloved thoroughbred Darkling Lord, fewer customers for his insurance business and thoroughbred breeding and sales, and the realization that he has a closed business and farm in which much of the community isn’t involved. He’s been caught in the business model of his father that is no longer viable.

In this dilemma, Cary and Pam give the problem of Pamela Ashworth to Connie. She will live in luxury at Ashworth Hall in Charlottesville with the famous lady and use her best investigative skills to find out the truth about the Ashworth family. Why did the family fail to flourish during the early years of Virginia? Who were earlier relatives who are associated with the name Ashworth? What are the facts about Pamela Ashworth and her life as a singer? What is the true history of Pam whose life story is still open to question? While Cary and his wife try to find solutions for their complex business problems, Connie will be working on the history of the family. No one realizes that the information Connie takes back to Bedford will be devastating and raise the inevitable question in cases like this: should certain family secrets never be divulged?