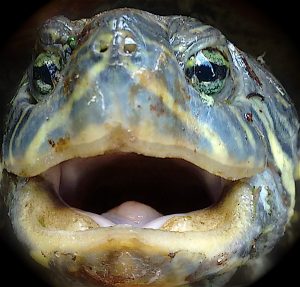 When this picture of the glorious, laughing turtle first appeared in my computer, I let out a huge, loud sound that can only be described as a guffaw. As I looked closer at his picture, I smiled and smiled. It took a while for me to settle down. No one who knows me would ever describe me as capable of a guffaw. What caused me to go to pieces over this turtle’s face?

At a more rational time later, I called Laura Krakowiak who took the picture and sent it to me. A country dweller, she thinks that the turtle might have been a female and was grimacing because she had eggs in her body and someone was disturbing her. On the other hand, I prefer to think of this animal as a “him,” who is grinning, not grimacing.

Curious, I asked Laura how she came to take the picture. One day, she heard her three dogs outside, barking “like crazy,” Laura said. She ran outside to find the object of their hysteria. There it was: a turtle lay by the fence that separates the cultivated back yard from a woody area with a pond. As the vigilant dogs kept broadcasting their discovery, Laura got a pail from the barn and put the turtle in it to save it from the dogs. Then, a sudden idea. Why not photograph it, add it to her portfolio of outside creatures? She gave the foot-long animal to her teen-age son to hold securely, and choosing a close-up vantage point, took the picture of the turtle’s face. Then she put the turtle back into the grass where the dogs had spotted him, quickly chasing the dogs inside. Once in the house, she attached her camera to her computer to access the portrait. Outside, the turtle disappeared from the scene.

I like to see pictures of animals that have been artfully photographed as they really look: I’m not a fan of dogs playing cards or cats in baby bonnets.

Once you see animals up close in photographs, I’ve noticed that every detail of their real appearance is often exposed, and the animal gains a unique identity. Many look different from the way we usually think of them. Take this turtle. This magnification of his face enabled me to notice the harmonizing colors and components of his face that he’s been given by nature or natural selection if you are a Darwinist. I’m drawn to the green lids on his eyes, eyes that appear to be dark brown. His head, I notice, is gray, yellow, and brown in his nostrils, eyes, and mouth. See that triangular pattern above his wide, wide mouth? His nostrils are at the top of the triangle; its edges are beige, white, and cream. I wondered what kind of turtle he is and decided on the Eastern Box Turtle.

I admit I’m still drawn to Turtleface, a name by which I refer to him. I look again at that happy smile and wonder why he is grinning, the fact of his grin, making him, in the last analysis, an animal to which we can relate, even though he is a turtle.

Here’s where being a novelist comes in handy. I can easily imagine him thinking, “So now you see me in my real appearance. Not that piddling little creature you all have seen as I make my way slowly along, hampered by my shell. You think that’s all there is to me. I’m pretty powerful because I have infinite patience to achieve the goals of my species. I will live a very long time. And I am thought to be wise.” Maybe Turtleface is expressing joy that he has survived the indignity of being put in a pail. Because he has survived the approaches of three yapping, furry things that called attention to his presence when he wanted to be let alone to go on his labored way and not be tortured by other creatures who do not possess his attractiveness. For obviously, he must think he is attractive. And because he’s thankful that Laura has enabled him to survive.

Accustomed to hiding his face as he stumbles along the paths that take so long to traverse, I don’t think Turtleface minds at all that we have seen that fantastic face and might even think it beautiful.